First things, first. That cannonball-with-a-handle-looking weight you’ve seen around the gym is a kettlebell, not a kettleball. With that common misconception out of the way, let’s clear up another because it’s not just the name of this old school-turned-au courant exercise tool that trips people up. The preeminent kettlebell exercise—the two-handed swing—has been know to leave gym-goers of all ages and ability levels scratching their heads, wondering,”You mean I don’t use my arms to swing this thing?”

Yes, you hold the ‘bell with your hands, and yes, your hands are at the ends of your arms. But when it comes to properly swinging the kettlebell, what we’re really using is our legs. When performed correctly, kettlebell swings build total body strength, power, and balance, while improving cardiovascular stamina, all with one piece of equipment [1].

If that sounds too good to be true, maybe it’s because you’ve never swung a kettlebell with pinpoint precision. Until now that is. Armed with this step-by-step guide you’ll learn to use your legs (and hips, and glutes, and core) to perform the perfect kettlebell swing.

It’s All in the Hips

As it turns out, dancing the salsa and swinging a kettlebell have a lot in common. OK, maybe “a lot” is pushing it. But they do share a coaching cue that makes every movement possible: It truly is all in the hips.

When it comes to the kettlebell swing, the hip action we’re referring to is a hinging motion. You know, like a hinge on a door. Think of your legs as the wall, solid and immovable. Your hips act as the hinge, enabling movement, and the torso is the door, traveling through a predetermined range of motion—dictated by both the wall (your legs) and hinge (your hips). The swing begins to take shape when the kettlebell is added into the mix.

With loose arms and a light grip, the kettlebell is swung from inside the quads up to chest eye level—in the Russian version, anyway (more on this later). The movement itself is a bit of an optical illusion. To the untrained eye the swing appears to be a feat of upper body strength: Simply squat and then stand up, all the while pulling with the arms.

Be warned, this is not the case. Performing the perfect kettlebell swing places all the emphasis on the posterior chain—the major muscles on the backside of the body from the heels to the base of the neck, primarily the hamstrings, glutes, and low back. Think of the posterior chain as the body’s powerhouse. These muscles are big movers. And unlike little movers (like calves, biceps, triceps, and deltoids), the big movers are capable of moving big weight and burning massive amounts of calories.

A total-body workout, with one piece of equipment? Yeah, right! We’ve heard that snake oil-laden sales pitch before. Not buying it?

Luckily, there’s nothing to buy. Well, except for a kettlebell. But the good news is that it’s a piece of fitness equipment that actually lives up to the hype. Still not convinced? Consider this: A study seeking to analyze the effectiveness of kettlebell exercise concluded that “kettlebells provide a much higher-intensity workout than standard weight-training routines and offer superior results in a short amount of time.”

The same study went on to say that the benefits of kettlebell training extend beyond strength and stamina by helping people, “burn calories, lose weight, and enhance their functional performance capabilities.”

Can You Swing It?

Sounds good, right? All that get-strong-lose-weight talk. Well then, it’s time to learn to swing and step up your kettlebell game.

1. Stand over the kettlebell with feet hip-width apart, chest up, shoulders back and down. The ‘bell should be in line with the middle of your feet. Choose a kettlebell that allows you to swing with perfect technique while still challenging you. Consider starting and practicing with a ‘bell much lighter than what you’ll eventually use to work out so that you can practice your form.

2. Squatting down, grip the kettlebell with palms facing you and thumbs wrapped loosely around the handle.

3. Stand tall, still gripping the ‘bell. Keep your arms long and loose while retracting your shoulders blades and engaging your core. Soften the knees, shift your bodyweight into your heels and lower your rear end back and down toward the wall behind you. At this point you should be ready to spring—er, swing—into action.

4. It’s go time. Driving through your heel, explode through the hips to send that weight swinging upward from your quads. We’re aiming for chest height, with the arms extended. Achieving this finish position requires you to snap your hips through, contracting your core while squeezing your cheeks. (Yes, those cheeks!)

5. As the kettlebell begins to descend, let the weight do the work as you ready your body for the next rep. Shift your weight back into your heels while hinging at the hips and loading both the hamstrings and glutes. Receive the weight allowing the kettlebell to ride back between your legs.

6. As it makes the transition from backward to forward, drive through the heel and hips to keep this party going.

There’s nothing like an arms race to create animosity among nations (or in this case coaches and their respective exercise communities). In this conflict the arms aren’t nuclear, but the fallout sure can be. This spat pits the Russian swing against the American swing in a battle for kettlebell supremacy. 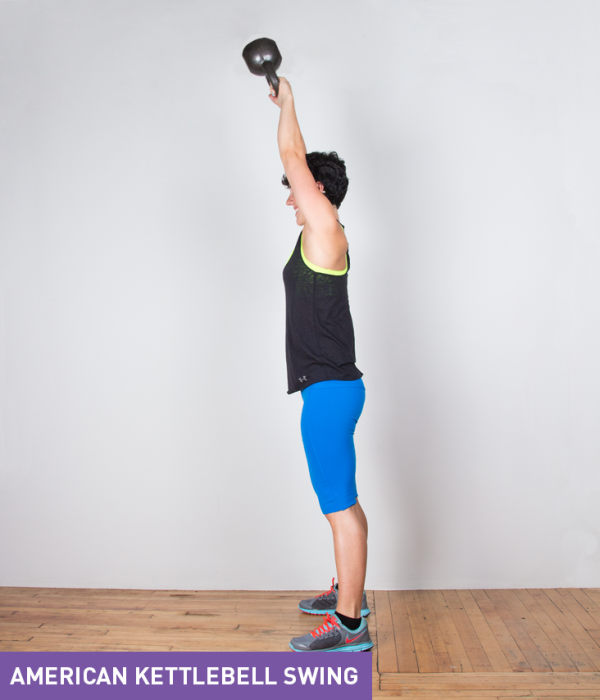 That said, the decision on where to pledge your allegiance should be based on personal ability level and safety. Practice the Russian swing until perfection. Then, and only then, does defecting become a possibility.

Like most things, there’s a right way and a wrong way to use a kettlebell. Paying close attention to just two aspects of the swing will ensure a successful—not to mention injury-free—workout.

1. Lift with the legs.
It’s called a kettlebell swing, not a kettlebell pull. With that in mind always drive and explode from the legs and hips.

2. Brace yourself.
If your back hurts, something is out of whack. Chances are you’re either rounding your back by not bracing your core and retracting your shoulder blades. Or you’re initiating the descent of the kettlebell with your chest, allowing your torso to drop to the floor. Start and finish the swing by loading, firing, and hinging at the hips.

How to Do the Perfect Kettlebell Swing